An Android Library that makes it easy to make grid views with sectioned data and headers that stick to the top.

Based on the "Other Widget" category.
Alternatively, view StickyGridHeaders alternatives based on common mentions on social networks and blogs.

Scout APM allows you to find and fix performance issues with no hassle. Now with error monitoring and ﻿external services monitoring, Scout is a developer's best friend when it comes to application development.
Promo scoutapm.com

* Code Quality Rankings and insights are calculated and provided by Lumnify.
They vary from L1 to L5 with "L5" being the highest.

Do you think we are missing an alternative of StickyGridHeaders or a related project?


Add another 'Other Widget' Package

This repository is abandoned and will no longer see any development or support.

The replacement SuperSLiM is an implementation of a layout manager on top of RecyclerView. It offers extensible layouts per section, and multiple display modes for headers, including sticky headers. Really, it is better in every way with superior performance, configuration, and is not a hack of ListView, which should completely sell you on it.

StickyGridHeaders is an Android library for Android 2.3+ that provides a GridView that shows items in sections with headers. By default the section headers stick to the top like the People app in Android 4.x but this can be turned off. StickyGridHeaders also automatically sizes its rows to the largest item in the row.

StickyGridHeaders has been designed to be adapter compatible with, and was inspired by, StickyListHeaders.

Development on master will now focus on bringing the headers into the view hierarchy and resolving dpad navigation issues.

Sticky Grid Headers can be added to your project as an Android Library Project, a Jar library, or using Maven.

StickyGridHeadersGridView replaces the use of a GridView in your application and is used in the same manner. To get all the functionality your ListAdapter must implement one of either StickyGridHeadersBaseAdapter or StickyGridHeadersSimpleAdapter. The choice of the implementation allows you to decide between the 'Simple' version which automatically does some housework to enable the grid sections and headers, or the 'Base' version which leaves that work to you so you can implement a specific solution for your data set.

Including in your Project

This library can be used as a .jar file included in the libs/ directory of your project. The latest version is available from Google Drive.

For Maven users, StickyGridHeaders can now be easily included by specifying it as a dependency: 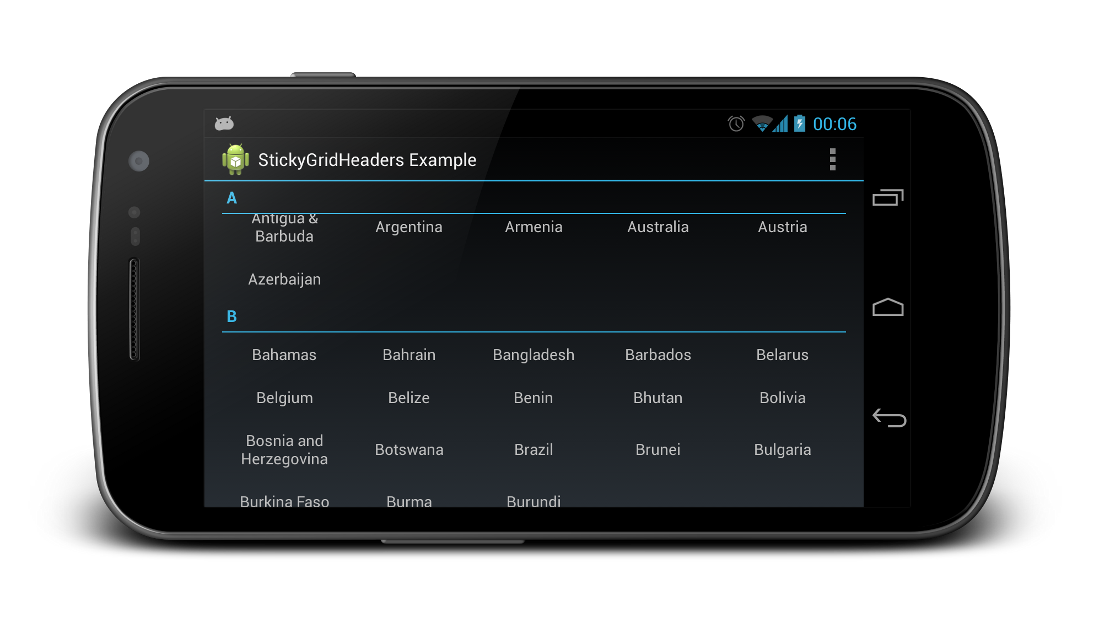 The example source code is included in this repository.


*Note that all licence references and agreements mentioned in the StickyGridHeaders README section above are relevant to that project's source code only.